Montreal, 23 September 2020 – As Justin Trudeau prepares to make his Throne Speech, pediatric emergency physician Samir Shaheen-Hussain has published Fighting for A Hand to Hold: Confronting Medical Colonialism against Indigenous Children in Canada. The book, released today, exposes the historical and on-going violence inflicted on Indigenous children in Canada and the Canadian medical establishment’s role in the genocide of Indigenous Peoples.

The Throne Speech occurs in the context of the devastating COVID-19 pandemic that has exposed underlying economic, political, and social injustices throughout the country. Indigenous communities have implemented strict public health measures at least in part because they know all too well how Canada’s vaunted public healthcare system has historically failed them. The crimes committed by medical practitioners and healthcare systems against Indigenous Peoples in Canada over the last century and a half include: fomented community-wide smallpox epidemics and avoidable tuberculosis deaths; experiments and abuse in residential schools, Indian Hospitals, reserves, and communities; forced sterilization; abduction and disappearances.

Author Dr Shaheen-Hussain states: “The Trudeau government recently recognized the ‘national historic significance’ of the residential school system, but it was more akin to a ‘national genocidal event’. The examples of medical violence against Indigenous children detailed in Fighting for A Hand to Hold have always occurred in the context of the destruction of Indigenous language and culture, and the ongoing dispossession of Indigenous Peoples, their lands and resources. In other words, colonial genocide.”

Despite the difficulties imposed by the pandemic, the Canadian government has an opportunity now to do right by Indigenous children, their families, and their communities. Cindy Blackstock, member of the Gitxsan First Nation and executive director of the First Nations Child and Family Caring Society, states in the book’s foreword: “Ensuring substantive equity for First Nations, Métis, and Inuit people stands only to empower Indigenous communities while enriching Canada’s national fabric at the same time.”

In the book’s afterword, Katsi’tsakwas Ellen Gabriel, Kanien’kehá:ka human rights and environmental activist-artist, proposes a path to deal with Canada’s crimes: “Reconciliation, a most overused word these days, must be genuine, accompanied by reparations and restitution.” Today’s Throne Speech is a moment to commit to genuine reconciliation by supporting Indigenous sovereignty and self-determination.

For more information or interviews with the author: 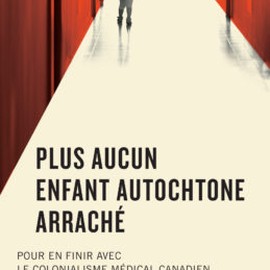 Fighting for A Hand to Hold